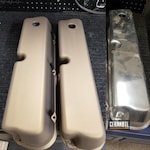 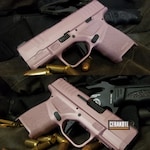 Mike V. from Glendale, AZ, US

Greetings to all whose eyes are upon this: I wish I could avert your eyes to the two pistols that “Tim” at “Alternative Firearm Coatings” (www.ACoating.com). As for having a picture speak a thousand words, in this case, that euphemism would fall short of doing the amount of justice/high accolades his work deserves. Having prefaced the general posturing of my mindset, my wife’s and our collective satisfaction, I’d like to point out just a few of the things that come to mind, but again, are a pinecone in the forest of great work he does and the way he does it in the sense of “you”, the “job description”, “communication”, and the “finished product”; all the while making you feel as though you are there when you’re not and are in control of finite things that may or may not pop up along the way. When I say “along the way” I am speaking of a very short “way” as I’ve NEVER had quicker service until I met the man. The H&K USP 45 Tactical V1 I submitted as one of two pistols was a “do over” from some pretty shoddy work performed by another outfit whose name I am omitting (though I really want to plug it in and go off - but this is not what I am presently here for) I am here to say that this first pistol frame was formerly coated in a shade of brown less than 1 year ago and was already worn off in many places with the inside having runs and overspray and obvious signs that he had not stripped the gun entirely. Tim explained in detail how he was going to approach this problem and fix it (in great detail with the utmost patience for my questions that were most likely very novice ones). We then took swatches out into the sunlight after looking at them in a darker setting to show the difference between the two settings. I was quick to ascertain what shade of tan/brown I wanted and asked him about how it would come out (as I formerly was disappointed with the color that had no resemblance of the swatch color the other place showed me on my pistol frame (HK). I was told by the other company that it would “tame down after use and from UV exposure” etc. (It had harsh tones of yellow which I specifically said I did NOT want any of). Tim let me know that what I see is what I would get. Nothing could be truer! I decided right there that I would go ahead and have the upper/slide done in a really cool looking (the exact color dark, somewhat olive green shade). This decision was made in part from his again, from all the answers he gave from the ton of questions I posed and from his language involved for things that I may or may not have considered. I was completely confident before handing over the entire gun and I hadn’t even had any work done by him historically. The two-toned graphite black and sky blue job we hired him for on my wife’s Smith and Wesson M&P 9mm was previously a drawing from me that I scanned and emailed to him. (I still draw stick figures to represent people ala if I were to paint it would be “by numbers” and if I stayed between the lines I must have gotten help from someone!). Despite my lack of artistic qualities, I was able to communicate to him the custom lines on the slide my wife wanted. Then upon arrival to his shop, (we did both on the same day), he sketched what he thought we wanted and with a little bit of coaxing he inputted his opinion for the custom lines to end the blue on top of the slide right about where the extractor sits and return to the black that was already part of the gun. However – he suggested going with a choice of several blacks from Cerakote to go over the original (that was a little grayish even though the pistol is new as it’s a natural shade) color and the same black on other parts like the widened mag well that was already a plastic shiny black and more to create a uniform black in color over all those parts that were black. I was JEALOUS when we picked the guns up as hers was so beautiful (mine is more of a military coloring on purpose) that I wished I owned it, then I realized (lol, wait, she’s my wife….I do own it or at least can shoot it whenever I wish!). The design he helped create from the worst drawing you’ve seen on my behalf was so amazingly the same as I had in my head but was stuck there as again, “not an artist”. Sorry about the book but like I said, a pic being worth a thousand words is too short for Tim (Alternative Firearm Coatings). He projected right around 2 weeks until he would be finished, was there for me and my questions constantly. Was so punctual with anything he’d say he would do, and best of all (besides the flawless, absolutely FLAWLESS Cerakote job that makes me want to hang the guns in framed glass boxes instead of shooting them) is the fact that I received a phone call that was NOT two weeks like he projected, but (I can’t quite remember how many days) but it was LESS THAN ONE WEEK! I HIGHLY (OR ANY WORD THAT TOPS THAT) RECOMMEND TIM AT ALTERNATIVE FIREARM COATINGS OVER ANYONE I’VE EVER DEALT WITH. AND GET THIS; BOTH CERAKOTE ANNNND GUN SMITH WORK! Thank you soooo much Tim! I will and have already referred as much as possible to you. Lol, it’s somewhat easy when I’m carrying either pistol outside the waistband as I am approached instead of the opposite! Mike and Brenda Villers