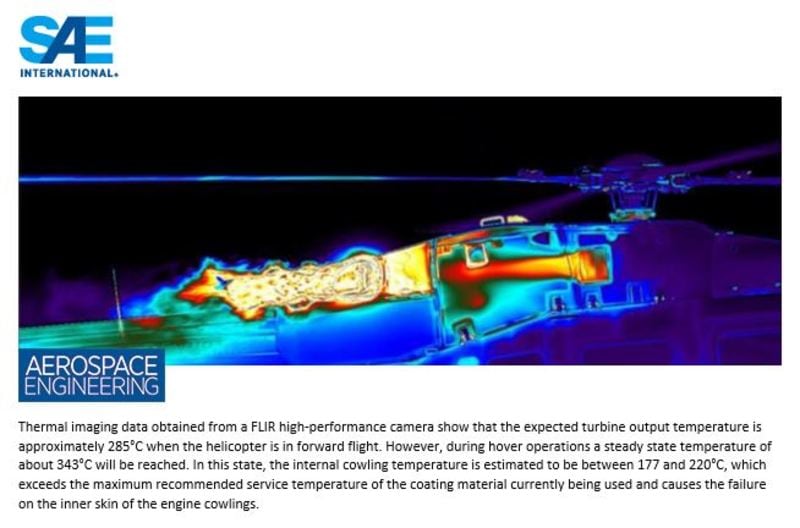 Thermal imaging data obtained from a FLIR high-performance camera shows that the expected turbine output temperature is approximately 285°C when the helicopter is in forward flight.

However, during hover operations a steady state temperature of about 343°C will be reached. In this state, the internal cowling temperature is estimated to be between 177 and 220°C, which exceeds the maximum recommended service temperature of the coating material currently being used and causes the failure on the inner skin of the engine cowlings.

Three approaches can be proceeded to alleviate or even eliminate this defect: (1) redesign the engine cowling to improve ventilation during the hover operations; (2) fabricate the engine cowling with a higher thermal resistant material; or (3) replace the current epoxy seal coat with ceramic coating materials that are efficient after extended exposure to heat.

After weighing the three options, researchers from Mississippi State University and Airbus Helicopters decided that the third approach was the most time- and cost-effective solution and could be easily implemented into a current production line once its effectiveness was verified. This article follows that approach to select the candidate coating materials for the inner skin of the engine cowling and design a testing procedure to evaluate their heat resistant capacity.

The current solution for heat, fire, and fluid protection on engine cowling panels is a two-component coating of intumescent paint and epoxy topcoat. The epoxy topcoat acts as a barrier against chemical attack from aircraft fluids and humidity, while the intumescent component is a fire protection barrier designed to prevent catastrophic structural failure in an emergency.

Intumescents in general are substances that swell in the presence of significant heat to form an insulating char to retard heat transfer. As requested by the FAA, the coating material for engine cowling application needs to withstand a flame of 1100°C for a period of 15 minutes without material breakup or flame penetration on the rear of the surface. Even though the compound of the intumescent and epoxy topcoat passed this flame testing, it has been performing poorly under elevated temperatures without open flame.

The stated service temperature of the intumescent painting material is 180°C. However, during the extended hover operations the inside temperature can reach 220°C, causing the current intumescent coating and epoxy top coat combination to fail to properly function.

Therefore, a non-intumescent coating material should be applied to withstand such heat buildup and any fluids while still providing emergency fire protection. Several alternative solutions had been considered, including thermal blankets, Mega-Temp spray-on insulation, and aerogel products.

The thermal blanket can be used as a fix but should not be considered for a permanent solution if weight increase is a concern. The Mega-Temp aircraft insulation is designed for being applied on fiberglass and E-glass materials instead of the composite materials of which the engine cowling is made. The aerogel and other similar types of insulation have excellent thermal properties but their mechanical durability as an exterior coating is questionable and they do not provide fluid protection.

Since the goal of the new coating is to eliminate the delamination and burning in the inner skin of the engine cowling and recognizing the need to minimize the cost for applying the new coating material and the overall weight of the cowling, main properties considered for the new coating material were thermal conductivity, reflectivity, thickness, and density. The ceramic-type coatings could be the most promising solutions in terms of their cost, weight, and protection capacity.

Ceramic coatings have been used by the automotive and racing industries to provide a thermal barrier for exhaust systems to reduce the engine compartment temperature. Such coatings can be either paint-based with a certain percentage of ceramic solids and a binder, or entirely solid and applied via a plasma spray process. The ceramic coatings possess low thermal conductivities, very high melting points, and low densities. In addition, they provide excellent corrosion resistance at temperatures far exceeding the maximum temperature experienced by the engine cowling (220°C).

Unfortunately, many ceramic coatings are not designed to coat composite structures. Experiments must be designed and performed to test their compatibility on the composite engine cowling.

Two ceramic coating materials were considered as the candidates for testing and assessment: Cerakote C-7700Q and Zircotec performance aluminum. Cerakote C-7700Q is a paint-based ceramic coating that is air cured and contains 69% solids by weight. The Zircotec coating does not have binders or fillers. It is applied through the plasma spray method and melted at 10,000°C. Melted drops of the ceramic are propelled onto the surface via a gas and quickly solidify, forming a layer that is welded, rather than adhered, to the surface. The Zircotec performance aluminum in addition has a metal surface layer to deflect radiant heat, a significant component of heat transfer in the engine compartment. However, the Zircotec coating can only be applied through a special process by professionals at the Zircotec facility in the U.K., which would be very costly and time consuming. Therefore, the Cerakote C-7700Q, a low-cost material that can be applied with a pressurized spray gun at about 30 psi, was ultimately chosen as the only candidate coating material for further testing and assessment.

The selected ceramic coating was painted on composite panels to make the samples. Those samples needed to be applied for a flame test to verify that the coating materials pass the FAA requirement and an oven test to show that the painted composite panels can withstand the engine cowling temperature (220°C) for a certain time period.

All the panels were made and painted at the Airbus Helicopter facility in Columbus, MS. Based on different painting schemes, those panels were marked and listed in Table 1.

A look at results

Comparing the performance of panels 1 to 3 during the tests it was deduced that Cerakote as a sole alternative to the current three coating system of surface protection (epoxy primer), fireproof lacquer (intumescent paint), and epoxy seal coat is not viable because panel 1 failed both the second oven test and the flame test.

During the 220°C oven test, panel 1 experienced delamination from its substrate within 3 min. This phenomenon could be due to the fact that when directly applied on the woven fibers the Cerakote did not have a consistent surface geometry to apply. The hypothesis that the surface area might be a potential issue that affected the performance of Cerakote was further supported by the fact that the Cerakote applied over the surface protection layer of epoxy primer (panel 2), as well as painted over the epoxy primer and intumescent paint (panel 3), did pass the 220°C oven test without any apparent harm or delamination.

During the testing of the sample painted with only the epoxy primer and intumescent paint, it was noted that excessive gasification of the material occurred during the 220°C oven test. This could lend credence to the possibility that the bubbling of the epoxy seal coat could be caused due to the breakdown of the intumescent paint that formed gas bubbles under the coating. Gasification of the intumescent paint was even more apparent when undergoing the flame test, in which the panel surface quickly broke down and charred and produced large amounts of gas.

Intumescent paint when undergoing the flame test acted in specified fashion by expanding/swelling and “mushrooming” out from the panel, preventing further harm to the substrate as expected by its fire-retardant manufacturing designation. A possible reason that the intumescent coating did not withstand when exposed to the 220°C heat is that the currently used type is rated for 180°C over 100 hours of direct heat. Temperatures reached during hovering exceed this value and could lead to an early and rapid degradation and disable the coating from functioning properly.

It is recommended that the epoxy seal coat in the current coating system be replaced by Cerakote to alleviate and remove the delamination and burning in the inner skin of the engine cowling when the aircraft is hovering. Moreover, the recommended Cerakote C-7700 Q can be used to paint on current engine cowlings to improve their heat resistance.

Cerakote has long been used in automotive industries to provide a thermal barrier for exhaust systems to reduce the engine compartment temperature, the results obtained from this study for the first time suggest its applicability in aircraft.