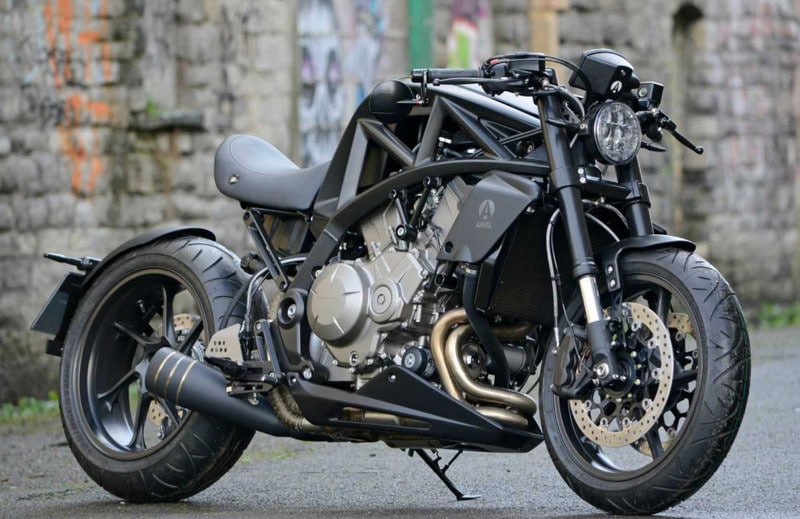 By: Janaki Jitchotvisut Are you planning to attend Motorcycle Live 2022? It runs from November 19 through 27 at the NEC Birmingham in England, and will feature the latest and greatest new bikes from a wide variety of your favo(u)rite manufacturers. That includes world premieres, such as the extremely limited-edition Ariel Ace Black Edition. The official unveiling is scheduled to take place on November 19, 2022, at Motorcycle Live. Just five of these machines will ever be made, in total. The Ariel Ace line is powered by the same 1,237cc Honda V4 engine found in the VFR 1200, which makes a claimed 172 brake horsepower and 131 newton-meters (or 96.6 pound-feet) of torque. It’s mated to a six-speed gearbox, and is a shaft-driven machine. What sets the Ariel Ace Black Edition apart is its unique, Cerakote-treated, CNC-machined aluminum frame and componentry. This gives the Black Edition a more aggressive appearance. Is it too much black? Not at all, since the engine, headers, brake discs, and fork stanchions all come in colo(u)rs other than black. Three bronze-colored rings around the end of the matte black exhaust add an additional accent there, as well. Pricing starts at £22,495, not including VAT. That works out to about $26,683, if converted on November 17, 2022. Since Ariel Aces aren’t exactly bikes that you see every day, you may be wondering what it’s like to ride one. Lucky for us, six-time British SuperBike champion Shane Shakey Byrne had the opportunity to take one out and put it through its paces earlier in 2022. He teamed up with automotive journalist Jonny Smith and is now doing a frequent motorcycle segment called Byrne Out on Smith’s YouTube channel, The Late Brake Show. If you’re interested in seeing the Ariel Ace Black Edition in person, hopefully you’ll be able to make it to Motorcycle Live. It’s a familiar place for Ariel to unveil Ace special editions, such as the Ariel Ace Iron Horse it pulled the wraps off of way back in 2019. That particular bike featured Ariel’s girder front fork, scads of beautifully polished aluminum, and according to Ariel, each bike would be made, start-to-finish, by a single craftsperson.